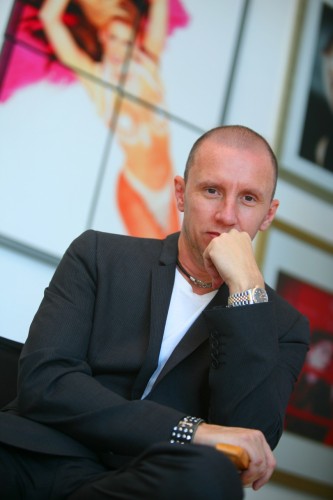 Andy Walmsley grew up 'In a trunk' in a showbiz family in Blackpool the U.K's Las Vegas. He spent his childhood backstage in various Theaters and TV studios, sitting in a stroller in the wings watching his parents perform. (his father was a famous Comedian and his mother performed a Fire eating specialty act) A career in show business was inevitable but he was unsure of his direction and pursued ambitions ranging from drummer to Jim Henson puppeteer. A short-lived 'phase' of wanting to become a TV cameraman led Andy directly to set design. Whilst making miniature set models to study the different camera angles and positions, his models improved and eventually he figured why not    design the sets instead of shoot them.

B.I.T.N. asks every Designer the same 6 questions in the Design Forum.  I know, I know, seems pretty lazy on our part, but each designer is unique, and their individual take on the same subject can prove a fascinating peek into the mind of an artist.

Q 1 – How and when did you first get interested in designing for theatre?

In 1981 when British flick Chariots of Fire swept the board at the Academy Awards Brit writer Colin Welland waved his best picture Oscar in the air and famously announced “ The British are coming “ this was inspiring stuff to this then 14 year old English lad watching his Telly in rain swept Northern England.

I had always had a fascination with Broadway and Hollywood as a kid and when I started to visit both holy grails on Vacations later in life my fait was sealed, I knew I wanted to live and work here I just wasn’t quite sure how it was going to happen.

I was fortunate enough to enjoy a successful career as a Theater Set designer early on and even more fortunate to find myself designing two Broadway shows just a couple years out of college. I had checked off the “ must work on Broadway “box on my ‘to do’ list but Hollywood was a far off dream.

My TV career finally started to take shape in the UK when I landed what would be a monster gig. I was asked to design a small quiz show called ‘ cash mountain ‘ I was told by the producer. “make it look nothing like any quiz show you have ever seen before, just do something totally unexpected. The show was re titled WHO WANT’S TO BE A MILLIONAIRE and some say ( not me ) that my iconic ‘in the round’ plexi glass bowl floor  design re defined the visual style of quiz shows around the world.

The show was unprecedented in many ways particularly the fact  that the producers insisted on selling the show around the world as a franchise with every detail of the set to the last nut and bolt being reproduced exactly as per my original blue prints. Before long I was flying off to Egypt to figure out how we could build a chrome set in a desert and not long after that Germany, Sweden, the list goes on, in fact the set was reproduced and re built identically in no less than 108 countries making it the most reproduced scenic design in history (something I am very proud of). When talk of the show coming to the states hit my ears I figured “ this is it, this is my entrée to a life in America…when do I pack ? “

for some sad reason that I have since erased from my memory it was not to be and although my exact designs where reproduced here ( and to this day are used ) for the American version Destiny would not allow me the opportunity to work in tinsel town.  Some kind of justice was enjoyed when in 2009 my design featured heavily in the Oscar winning juggernaut Slumdog Millionaire.

Q 2 – Who and or what are some of your inspirations?

John Napier the 1980s British Theater designer.. I owe it all to him

Q 3 – When you design for the stage, what is your thought process?

That’s a difficult one to answer it really depends on the project.. I’m currently designing The Muppet show at the Hollywood bowl and the Love Boat musical for Broadway and with both of those it was a case of reminding myself what they both looked like when they aired on TV in the 1970’s and then taking that inspiration to guide me to the style the shows needed.  If I where doing a production of Shakespeare’s Hamlet and for some weird reason the director wanted to set it in the future id be channeling my inner Star Wars and trying to come up with something very futuristic that has never been sen before.

Q 4 – What, if anything, do you think technology brings to the worlds of theatre design?

It is essentially killing the art of theater and TV set design as LED screens are taking over specially in TV design and slowly in Theater.. this takes away most of the theater set designers skills and hands them to a graphic designer who creates scenery on screens.  More and more I find myself designing simple sets with led video screens all over them and then handing it all over to the graphics designer.. I get the same fee and the same royalties and shouldn’t complain but it takes away the ability for the set designer to be in control of the overall vision.

Q 5 – What advice would you give to an aspiring designer?

Theater is fine and will always be around but TV id say forget it.. young people are not buying TVs anymore and its my prediction that other than news and sports most TV will be all but gone within the next 5 to 10 years. Anyone looking to get into the TV industry as a set designer now should totally forget it its yet another industry killed by the internet.

Regards to Big Image systems I am one of the old school Theater set designers who used to work with amazingly talented scenic artist painters who could whip up an incredible back drop from a pretty awful sketch from me and make me look like a rock star, with large format digital printing the traditional scenic artist is a dying breed, however it is a great added layer of control that I or an assistant can create an exact piece of artwork digitally have it approved by the producer and then print it at a huge scale and it look EXACTLY like my artwork rather than a scenic artists interpretation of my artwork.

Show Scrim for “Idaho The Musical Comedy” at the Smith Center. Printed on Sharkstooth Scrim by Big Image Systems

To see the full range of Andy’s work, click the link below

This site uses Akismet to reduce spam. Learn how your comment data is processed.

HOW CAN WE HELP YOU?

Are you looking for a quote?

Fill out the form below, we’ll be back in a jiffy!