WARNING! - This article contains spoilers.  It also contains a photograph of a real Naked Mole Rat ...

... I think it's safe to say that you're going to be seeing a lot of naked mole rats for the foreseeable future ...

"Naked Mole Rat - The Rock Experience", the new children's musical commissioned by SCT and adapted by author Mo Willems, is infectious, fun, a little cheeky, and tailor made to spread through the world of Children's Theatre in the same way Willems' earlier adapted work "Elephant & Piggie's We Are In A Play", pops up on a regular basis across the country. 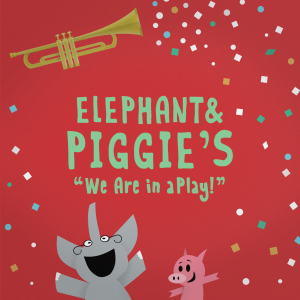 "Elephant And Piggie's We Are In A Play" was the first official collaboration between Willems and SCT, and the success of that production immediately led to the next.  "Naked Mole Rat" is the rollicking result of these discussions.

For the world of Children's Theatre, it is worth the wait ...

“Naked Mole Rat – The Rock Experience” is in the larger of SCT’s two theatres, The Charlotte Martin.  It’s the right stage for the show.  The premiere is big, bright and deep, and the production uses every inch of the stage and then some …

I had the chance to be in the audience on opening night.  The house was packed, an interesting mixture of parents and their kids, friends and family of the crew and cast and a couple of oddballs like me.  There was a good energy in the crowd, and a brief introduction by Mo, Hartzell and composer La Puma encouraged the audience to get in on the action.

Being Children’s Theatre, the themes are instantly recognizable and familiar; friendship, peer-pressure, nonconformity, acceptance and inclusion, and “Naked Mole Rat” uses each perfectly …

“Naked Mole Rat – The Rock Experience” centers around a core group of Mole Rats with witty, (and easy to remember unless you’re actually at Starbucks) names, Venti, Grande and Tall.

Grande, (played with a loud energy by Lisa Estridge), is the defacto leader of the group, and very concerned that things go by the book. Estridge hits the right mix of bossy and compassion, it’s easy to see why children would instantly recognize her. Venti, (played with solid Bill And Ted dimness by Actor Duncan Frost), is the oafish good natured one who lives for the rocking nakedness and the word “Dude”.  Frost does a great job. Not a leader and totally cool with that.  And Tall, (the gangly, timid but yearning to be free one played by Kate Jaeger), She instantly conveys the nervous wallflower with an inner free spirit just under the surface.

The opening number immediately sets the tone.  Mo Willems and company have taken the idea of “Rock Experience” to heart.  This is a goofy rock opera with a heart for kids.  A live band (off stage left but in on the action), turns it up to eleven during the opener.  Rock and Roll lighting and a straight up in your face stadium anthem called “NAKED! NAKED! NAKED! NAKED MOLE RATS!” extolling the virtues of nakedness gets the audiences attention.

Who knew that being naked and rocking is what mole rats do every day?  Tall, Grande and Venti make it clear that this is how it’s done by every mole rat, and anything out of the ordinary is suspect.

To drive home the point, the scene cuts away to CNN, the “Constantly Naked Network”, to deliver the weather report, which is, of course, always the same in a tunnel.

I must admit I was curious going in how they planned to pull off the “naked” in naked mole rat. To whit I offer exhibit A …

In the spirit of total honesty, to me this thing more resembles a walking stick of butter from the underworld. I sleep on a mattress on the floor, so the less I think about  these hairless ambulatory little nightmare filled tubes the better.

But Costume Designer Cathy Hunt, (A veteran nationwide costume designer whos credits include 5th Ave Theatre, Pittsburgh Playhouse, LA Theatre works and many more), cleverly tackles what must have been a very narrow window of options.  She makes the wise choice to break up the single color with texture; a wrinkled belt that holds the tail and a wrinkled collar to mask the neckline.  These details, and the clever addition of a bellybutton, take what could have been a beige blob and give it just enough depth to keep the mole rat vibe …

But there’s trouble brewing in the colony.  One the friends didn’t show up for the morning rock out.  Where’s Wilbur?

Wilbur the mole rat, (Played by actor Richard Gray), is off wandering the tunnels alone, thinking.  Gray plays the role of Wilbur with Children’s Theatre perfection. You like him the moment you see him, and he plays the role in classic “Herbie The Elf” niceness mixed with a little emptiness. He’s a nice guy, even when the outcome wont be good for him.  He wants something different, some change and color in his life.  He’s naked like the rest, and the peer-pressure to stay that way is something he finds a little boring.

So it’s like a message from the heavens, (okay, from the hole above his head), when a hat floats down, landing at his feet.  (As we all know, hats are a gateway article of clothing), and when Wilbur Dons the bright blue Chapeau, he realizes that clothes are the thing to fill the void!   Shortly thereafter, more cloths fall from the sky, a complete ensemble, in fact!  Buoyed by his new found duds, Wilbur seeks out his friends …

I wish I had better photographs of the set.  Designed by Jeffery Cook, (who is also listed as Charge Scenic Artist for SCT), is big, ambitious and alive.  It combines a series of hard proscenium-high walls, that act as the curved openings of the mole tunnels.  These walls trail painted scrims, like billows, which maximize space on the stage and allow multiple positions.  The scenic treatment fits perfectly;  sand and brown tones veined with broad white strokes, mimicking the dirt and rock of the mole rat’s home.  These walls travel left ,right, and fly, instantly creating the different locales.

It’s also a deep set, taking up the entire stage up to the Cyc Wall. The set pieces have the ability to bi-part and fly out in order to reveal some or all of a boldly lit upstage Cyc for certain numbers.

The set also affords a range of special effects, including both real and painted clothes flying in from overhead.  Some of the more charming aspects include the inclusion of the live band within the set as well as incorporating scenically painted elements based on Mo Willems’ illustrations.

I was there on opening night, and there were a few brief, (and barely noticed unless you’re a critic) hiccups where the fabric of the set got snagged during motion, but this is the joy of live theatre.

If you want to mount this production, the show is strong enough that it can stand alone from this ambitious of a set. SCT has the luxury of a well equipped theatre, and it’s the world premiere so go big! But future productions can do with much less and achieve the same effect.

Decked out in his new clothes, Wilbur returns to his friends in the colony, ready to unveil the new and improved and fulfilled Mole Rat he is.

Grande, Venti and Tall are shocked!  Naked Mole Rats!  It’s right there in the name!  It’s not normal, it’s different, it’s a scandal!  They attempt to explain to Wilbur what his newfound togs will do to the colony.  But Wilbur is undeterred, (and its moments like these where Tall Mole Rats’ inner yearnings of individuality begin to comically bubble to the surface.

Undeterred, Wilbur is determined to spread the word by opening up his own clothing store, HAT’S & MORE, (with a hilarious segue to his new store H&M).

It’s this number, “Hats And More”, plunked squarely in the middle of the show, that made me convinced that “Naked Mole Rat” will be a hit.  It’s a classic show-stopping song and dance number.  Composer Deborak Wicks La Puma, (who also composed the music for “Elephant And Piggie), really knocks this one out of the park.  It’s spot on, colorful and funny. Deborah and Mo have decided to tell a good story and have fun.

The band is onstage, enveloped by the set, and is drawn into the action by the cast.  It’s a charming aspect.  Bassist Hamilton, Guitarist Kathy Moore, Drummer Scot Sexton, Keyboardist and Music Director Tim Symons, seemed to be enjoying the interaction.  The music is simple enough that other productions can easily do a live accompaniment, but canned music would work just fine.

Sure enough, news of Wilbur’s mold-breaking individuality spreads through the colony.  Vente, Grande and Tall are forced to resort to drastic measures, dragging Wilbur to the home of  Grand-Pah Mole Rat, (Played by actor Greg McCormick Allen), the oldest and wisest Mole Rat, who’s wisdom is the law of the land.  When Wilbur resists, they go Defcon 5, activating the Grand-Pah Panic Button.

This precipitates another song, performed by cast member Vickielee Wohlbach as “Secret Service”, Grand-Pah’s protective detail.  She’s a no nonsense protector, (why else would a mole rat wear sunglasses?).  And soon enough, Grand-Pah Mole Rat enters the scene.

After listening to Wilbur, he decides that he will soon make a colony-wide Proclamation on the subject, and orders the entire colony to gather for the edict.

Wilbur’s nervous.  Should he conform or not?  His friends suggest it may be time for  Wilbur to pack his suitcase, (it’s Children’s Theatre, so I don’t ask why a colony of naked mole rats would need a suitcase), and leave.

Wilbur briefly runs away, but, realizing that no matter what, he’s still a mole rat, he returns to hear his punishment, naked except for a pair of argyle socks.  He’s willing to accept a life of nakedness, (almost), to stay with his friends.  He bravely awaits his sentence.

To Wilbur’s surprise, Grand-Pah Mole Rat arrives decked out in a suit!  He tells the colony that after thinking about it, wearing cloths, doing things differently, isn’t bad after all!  Instead of asking “Why?”  Maybe it’s time to ask “Why Not?”

As we suspect, Tall Mole Rat is the first to break out, launching into a beautiful Operatic Aria, instead of the usual rock.  And the world doesn’t fall apart.  In fact, more and more cloths fall from the sky, and the Mole Rats launch into an impromptu Fashion Show in a rousing finale.

So hat’s off , (or in the case of Wilbur, Hat’s squarely on!) to Seattle Children’s Theatre, Mo Willems, Deborah Wicks La Puma, Linda Hartzell, Courtney Sale, Tim Symons, Jeffrey Cook, Cathy Hunt and the dozens and dozens of other production professionals who were instrumental in the creation of “Naked Mole Rat – The Rock Experience”.

To Order tickets and learn more at SCT.org, CLICK HERE

This site uses Akismet to reduce spam. Learn how your comment data is processed.

HOW CAN WE HELP YOU?

Are you looking for a quote?

Fill out the form below, we’ll be back in a jiffy!